Andy Gibbs
Running 60 Miles At The Age Of 60
I have been running for almost 50 years and, in that time I have run quite a few ultra marathons; the longest being 85 miles along the Ridgeway, reputedly one of the oldest roads in Europe.  On 8th June 2022 I will be 60, so ​to prove to myself that I have 'still got it' I planned to run 60 miles.  There might be some walking / crawling, if necessary, back to Winsford.

I will run from Little Neston along the Wirral Way to Ellesmere Port, then join the Shropshire Union Canal heading south through Chester, Christleton, Tattenhall, Calvely, turning left onto the Middlewich Branch of the Shropshire Union Canal and heading northish through Church Minshull to Middlewich.   Another left turn joining the Trent and Mersey Canal heading north to Rudheath, skirting Northwich.  At Marbury Country Park a left turn bringing me through Northwich and joining the River Weaver and back to Winsford.

Go to the Route Page for an interactive view of where I will be running before the day or, you can watch my progress on the Live Tracking Page.  Bye eck it looks a long way!
The Big Day
​ 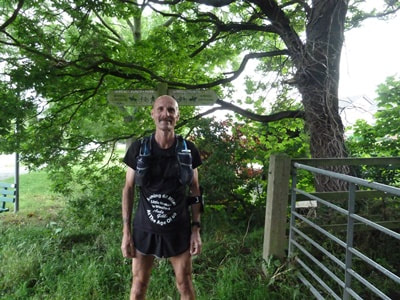 At The Start
Well I did it; I ran 60 miles to celebrate my 60th birthday on the 8th June.
​
After months of extra-long runs and weeks of planning the day had finally arrived.  The weather forecast wasn’t the best but, everything was in place, so I packed my waterproofs at the top of my race vest in readiness for the inevitable rain.

At 0645 I set off from Little Neston along the Wirral Way.  The track was very muddy with huge puddles, and I soon had dirty legs.  After a few days of self-enforced rest, my legs were raring to go and I ate up the 8 miles to RV1 in Ellesmere Port in 53 minutes.  Feeling good I didn’t really stop not wanting to lose the momentum.

After a couple of easy miles along the tarmacked section of the tow path, I came across a Tow Path Closed sign and a big barrier preventing any further progress.  I asked the workmen if they could tell me where the detour went and was met with a firm “no”.  Undeterred I asked Mr Google and was horrified to find the extra mileage I would now have to run.  Head down I cracked on re-joining the tow path much further on.  After a second detour, which I knew about, I arrived at RV2 in Chester.  18 miles completed and it was still before 9 am.   I stopped for 5 minutes to replenish my water and then ran on.

The next section of the Shropshire Union canal saw me running through waist high grass that soon had my shorts, socks and trainers wet through.  All I could think about was the high potential of blisters forming on my wet feet.  When the tall wet grass finally subsided it was replaced with heavy mud sections which made the going even tougher.  But eventually at 10.35 I arrived at the Shady Oak pub, near Taporley, which was RV3; 27 miles done.  My support crew had found a bench for me to take the weight off my feet; lovely.  A quick water and sports drink replenishment and a banana and I was off for the next section, still feeling pretty good.
​During the next section, my brother cycled along with me, and we had a good catch up, which really helped the miles fly by.  On one very rough section of the tow path I turned my ankle, luckily not badly, and I heard him say, “Not the most desirable conditions, are they?” thanks for stating the obvious bro!  At 12.00 he turned back to head home wishing me well for the rest of the run.  Just before RV4 at Church Minshall I hit some more waist high grass; this after my feet had finally dried out from the previous soaking!  After 5 hours and 30 minutes of running I hit the 35 mile point.  Some poor planning on my behalf found my support crew on one side of the canal and me on the other!  This required a bit of back tracking on my behalf, not really what I wanted!  After some egg butties and topping up my water I was off again, this time with a great running friend, Gary Thomason, who had materialised out of nowhere about 8 miles earlier than planned.

More long grass and muddy sections coupled with some light rain made the going difficult, but Gary’s company definitely helped.  I recognised a lot of this section as I was now fairly close to home and had been out here many times during the build-up phase.  The Chandlery in Middlewich, RV5, arrived at 42 miles and 7 hours 30 minutes of running. As we stopped the rain came down heavy, but thankfully didn’t last long and I didn’t have to don my waterproofs.

More mud and over grown paths greeted me on the next section, which was mentally tough, as I was also running away from home towards Northwich.  At one point I slipped and almost ended up in the canal, this coupled with wet feet, yet again, required me to dig deep in to my reserves.  Passing the 50 mile point was a real morale booster and out of no where the Old Broken Cross pub at Rudheath, RV6 appeared. I wolfed down a buttie and a coffee and headed off again.  The sun had now made an appearance which was very welcome.
​Soon after I left the muddy tow path and cut through to Northwich, which meant I was now heading back to Winsford and home.  Everything was now starting to hurt, but my feet had now dried out and I thanked my lucky stars that I had managed this far without getting any blisters.  I was now reduced to running 200 paces and walking 200 paces, but at least it kept my mind active counting.  I started to will the next RV point, Waitrose supermarket car park, in Northwich to appear.  Finally it did, and I inwardly cursed my support crew for parking so far away from the entrance, which meant extra distance.  While I was taking on more food Tom and Harry Dale appeared; they had agreed to run the last leg with me.

I wanted to stay in that car park forever, my legs were totally shot, and the sunshine was lovely, but I knew I only had 7 miles to go.  I set off with Tom and Harry and managed to run 2 miles, albeit very slowly, to Hartford Bridge, leaving 5 miles to the end.  As I slowed to a walk, Tom started to read out the social media posts from friends and family, which was a brilliant tonic for my tired mind and body.  Each turn or road crossing brought me closer to home and having run this section many, many times I went into auto pilot.  And then I was at the top of Bowland Rise, the finish, I looked down at my watch and read the magic number 60 miles; I felt amazing and really chuffed.

It was definitely tough going in places with the mud and waist high wet grass.  I couldn’t have done it without the assistance from my brilliant support crew Chris and Chris; thanks very much guys, I definitely owe you one.  And a huge thanks to the runners / cyclists who ran with me along the route, all the folk who watched my progress on my tracker and the lovely messages on social media.

​Just a couple of stats to finish off with, I finished the 60 miles in 12 hours and 2 minutes; completing 91,679 steps, using 8,692 calories, with my average moving pace of 10 minute 24 seconds per miles according to my Garmin watch!